Many people are anxious to leave their homes and go away on holidays for fear they will be robbed.  I've become more concerned that when coming home instead of finding things missing, I will find new stuff  that will have appeared out of thin air and arrived on my doorstep.  Now admittedly, a new shiny car or a large cheque would be OK but these are not the kind of items that materialise at my home when I go away for the weekend.

THIS is the kind of thing that arrives when I am not home. 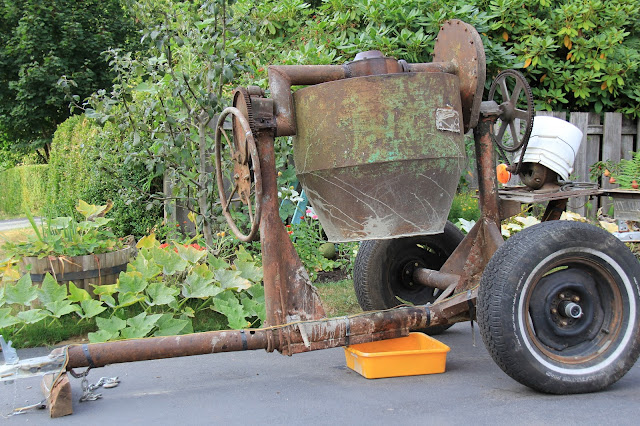 Yes, imagine my surprise to see this at the end of my driveway as we pull in.  At least I had seen it before and pieced together the puzzle.  My husband was thinking we needed to call the military to disarm it.  A few posts ago I mentioned I wanted an antique object to add whimsy to my garden - this was not what I was looking for, though it may be considered a family heirloom.  It is actually a cement mixer that my Dad has used for many years and recently resurrected for Shannon to complete the concrete foundation  for her new shed project.  Apparently once the concrete was poured the mixer needed to go somewhere so it was toed over to my driveway.  I think this may be payback for a trailer full of sand that I dumped at Shannon's place while they were away several weeks ago.  I am told the mixer is now 70 years old, though some of the parts it was frankenstiened from are even older.  The axle was from a model T-ford.

So now I guess the pressure is on to make the forms for the retaining wall under my deck.  Luckily Shannon off loaded a pile of extra navijack (a sand and gravel mixture used to make concrete) beside my house about a year ago so we might as well get mixing.  If only that would happen while we were away.