The old rickety shed that came with our house is past its expiration date.  The roof leaks, the floor is rotten, and it leans...so building a replacement shed has been on to do list for a while.  Of course I had grandiose plans of a cool westcoast modern looking shed with a green roof.  As usual, my original plans have changed because of cost.  According to my HH, the structure would have had to be much stronger to handle the weight of the green roof which would have ended up costing considerably more and Lauren pointed out that you wouldn't really be able to see much of the roof anyways.  So I let the green roof dream go.... at least for this project!

As mentioned in a previous post, we poured a concrete perimeter and used left over concrete paving stones for the floor. 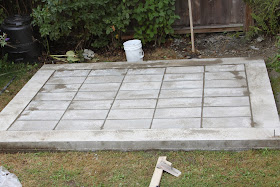 Next we framed up the walls.  As I held the front wall upright so HH could level and secure it I kept thinking, man this seems really tall, I need to step back and take a look at this.  So when the wall was secure and I stepped back, there was no getting around it; the front wall was GIANT!  Somewhere in HHs calculations he thought we might want to put a asphalt shingle roof on it instead of a metal roof which would require a steeper slope, apparently this is how the front wall ended up so tall...  After reiterating that I prefer a metal roof he agreed to cut the front wall down by 15 inches, I think he was also worried what the neighbours would think of the GIANT. 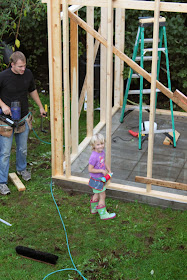 Our 3 year old decided she was going to help, she strapped on her tool belt and headed outside, I caught this picture of her checking the squareness of the wall....maybe she has been subject to a little too much diy?!? 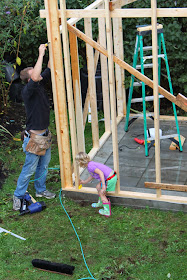 ﻿
We decided to clad the shed with one side good exterior plywood and use pine trim to cover the plywood joints and to make an interesting/modernish looking exterior on the cheap. 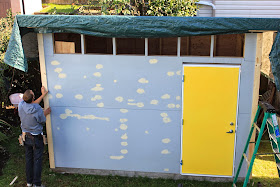 The metal roof was a bit of a pain.  Since I had conceded on the green roof, I was determined to have a good looking metal roof.  Of course the roof I wanted was one of the pricier options...  Ordering the metal roof proved to be painful, after getting quotes and talking with numerous sales people at big box stores and a local hardware store, it became apparent that none of them could answer questions about the correct flashing and installation requirements. Eventually after contacting the manufacturer and numerous special orders, we ended up with all the parts we needed and put the roof on before winter...whoohoo!
Here is the completed shed (minus a few touch ups) in all her glory:

We added windows along the top row of the front wall to allow light to enter the shed but still allow for lots of wall space for storage.  HH made the windows from old glass and wood from his dads.  I think they turned out great.  I painted the door yellow as I had left over yellow paint from when I painted our backdoor. 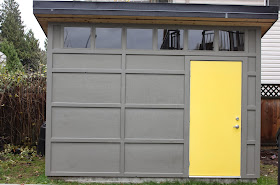 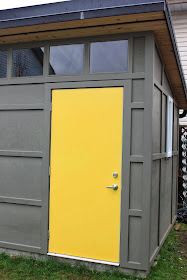 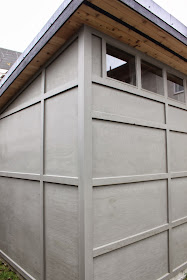 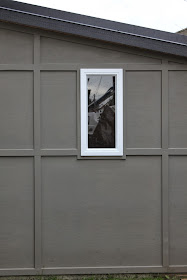 We used 5 inch tongue and groove cedar for the soffit. 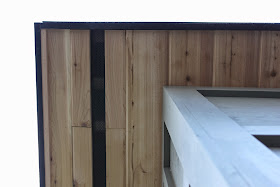 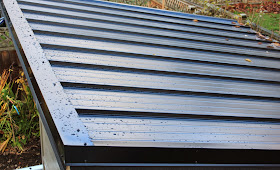 Now to move the stuff out of the old shed and attempt to organize it in the new shed!  Anyone have any good shed organizing suggestions?