There are not many plants that I admire and fear as much as bamboo.  The Zen quality of the rustling sound and shadow made by the tall strands as well as the potential to create a quick privacy screen have intrigued me.  However, I've also been warned - be careful it will bust through concrete and take over your yard, then the neighbours yard and then the world.  Still not completely deterred I did some research and found out that running bamboo is probably the most aesthetic kind (versus clumping varieties) but running means just that, roots that will take over unless control methods are taken (special barriers etc.)  So I set out to find bamboo to pot on my deck at which time I discovered it was very expensive, which seemed puzzling - if bamboo is running amok - shouldn't there be lots of it around for people to give away?   In the spring I was very excited to find an add on craigslist for "you dig, you take" bamboo within blocks of my house.  I call my DDS for an emergency plant escapade, dropped one kid off, found HH's reciprocating saw and our best shovels and off we go. Now the DDS' had yet to meet a plant that they couldn't wrangle, though the bamboo owner was impressed with our power tool she still had a bit of a smirk when we asked us to lead us to it.  The "grove" was a serious example of a hostile bamboo takeover.  The backyard was very small and had thick bamboo extending from the back fence with roots now approaching the foundation of the house (it had been allowed to free range for 10 years).  The home owner wanted it gone and was at the point of bringing in heavy machinery if it was not vanquished that weekend.  45 minutes of back and shovel breaking labour we were not able to get out any of the tall premium bamboo along the awkward area of the fence, the roots were too fierce.  We opted to take some baby roots with signs of possible shoots home for our own propagation.  After witnessing what bamboo can do I was nervous potting my little shoots for fear they might escape and wreak havoc.  Below you can see the potted golden bamboo roots have grown to about 24 inches after 5 months, still a few more years until they can make any kind of privacy screen. 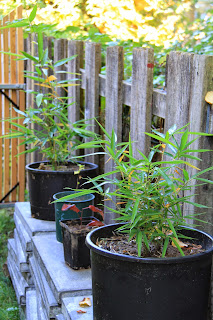 Yesterday on my way home I spotted something on the side of the road.  I think visual acuity for all things free on the side of the road might be hereditary.  Anyway, there it was, big tall bamboo pre-dug with tidily bundled roots with a "free" sign.  I went back later convincing my daughter we were going on an adventure.  The bundles were definitely heavier and more awkward to lift than my toddler.  After getting the roots into the vehicle  we drove the 3 (well maybe 5) blocks home with about 15 feet of bamboo trailing out behind us.  This afternoon I lugged it up onto my back deck to admire my score, 20 foot bamboo is a wee bit more than I bargained for, so I chopped it down to about my height.  Here is the glorious free bamboo with a Maple tree in the background: 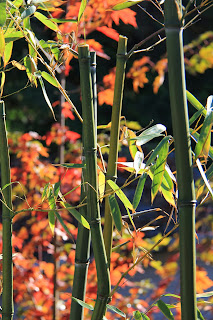